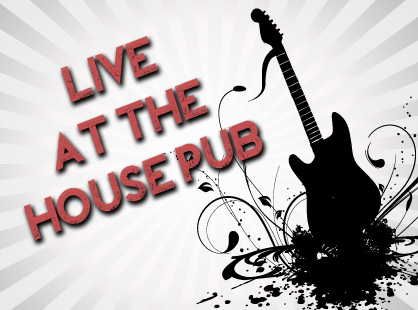 Live Music at The House Pub!

We are known for having some of the best music from Chicago land and beyond. All genres from all states, The House Pub has music 5 nights a week. Here is a list of some of our favorite and regular performers! 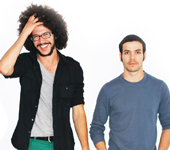 Beautiful Collision is an original musical ensemble founded by two brothers; Adrian Michael Perez, and Jason Cade Perez. The music they make consists of heart, rhythm, and study. Their percussive, acoustic rock sound, ranging from ultra mellow to thumping intensity, is for ears to hear, feet to move, and the mind to think. This band is called a Beautiful Collision because it is a mixture of people and their passions, expressed in the all-encompassing sound of music.

Rob Webster is a multi faceted musical vagabond from the northwest suburbs of Chicago, IL. Music has been pumped and run through his veins from a very early age. The “solo acoustic show” is an extremely melodic and vocal show with a twist of hellish pain and earthly happiness. Then there is the “one-man” show. This live performance consists of extremely rhythmic, and choral tones being drawn from the body like an exorcism of sounds. Rob Webster will take you deep into music history, introducing you to a whole new way to listen to your favorite songs. If you ever stumble upon the robwebstermusic experience, come along and see for yourself how much fun and inspirational it truly is to hear live music again. And please, for your sake, don’t be afraid to sing aloud and dance along to these electro-acoustic rhythms & sounds.

Frank Catalano makes his Savoy label debut with “Bang!” Bang! debuted at #12 on the Billboard Jazz Charts. Frank’s previous CD, “Mighty Burner” was on the Billboard Charts for 20 straight weeks. Catalano is the only known saxman to have performed with Miles Davis, Randy Brecker, Charles Earland, Elvin Jones, Stan Getz, Betty Carter, Von Freeman, Tito Puente, Tony Bennett, Les Claypool and Louis Bellson while still in high school! This led to his signing to Delmark Records at age 18 and a string of critically acclaimed recordings. Catalano has been heard by millions of people all over the world thanks in part to 3 Grammy-winning and 11 Grammy-nominated recordings with artists such as Jennifer Lopez, Destiny’s Child, and John Legend. He recently performed live on the Oprah Winfrey TV show with singer/composer Seal.

Train Company is a group of musicians that travel together and play rock ‘n roll music with one another. The group has always comprised of Johnny Z (lead vocals, guitar), Mark Alletag (Saxophone, guitar, woodwinds), Mike DeWitte (Bass, backing vocals) and Rob Lejman (drums). In recent years however, the group has taken to swelling as they see fit. The group’s most permanent 5th member has been Sam Wyatt on piano, keyboards, and key-tar. In addition, Train Company has been known to utilize various back-up singers, horn sections, and string ensembles when necessary (and physically possible). This comes from a deep belief within the band that the sum will always be greater than its parts.

The Chicago Blue-Dadds were formed in March 2011 by drummer Michael Hoge from players he thought were the best of over a hundred musicians that crossed the stage at a blues jam he hosted in St. Charles, Il. After playing together, Michael “lil Bro” Hoge, Alfred Shorter Jr., Al “Hurricane” Spears and “EZ” Dave Haines, it was obvious the chemistry was there. The first show as the Chicago Blue-Dadds was five days later. Since then, the band has performed over 65 shows with a very encouraging response.

In a world of cover bands and pop music, Noah Gabriel is a world apart. A singer, songwriter, and guitarist hailing from Aurora, Illinois, with six albums to date, and a seventh being recorded, Noah is already prolific. He’s an roots rock, Americana artist, with influences of blues, folk, and alt. country, borrowing from the styles of Stevie Ray Vaughn, Jimi Hendrix, Lucinda Williams, Chris Whitley, Ryan Adams, and BB King. Live, he and his band are known for a raw and brutally honest delivery.

After teaching at the college level for 2 years and defending a Thesis on friendship, Ed Anderson earned a Master’s Degree from Illinois State University in Interpersonal Communication in 1997. Upon completion of graduate school, Ed promptly took to the road where he remained for the next 15 years. Most notably he fronted the Bloomington based rock & roll band Backyard Tire Fire and over the course of a decade wrote and recorded 6 albums and 2 EPs and toured relentlessly through 45 states and 5 Canadian provinces, sharing stages with ZZ Top, Buddy Guy, Los Lobos, Cracker, and Govt Mule (to name a few), gaining national and international attention along the way.

The Rockin’ Johnny Band has been one of Chicago’s most loved blues bands since 1995. Their music has been played on WXRT’s “Local Anaesthetic” and “Blues Breakers” radio shows, the band has often been featured at The Chicago Blues Festival, and they regularly work in Chicagoland’s best blues clubs such as Buddy Guy’s Legends. Their CDs and live performances have drawn great reviews in Living Blues, The Chicago Sun Times, Pioneer Press, and National Public Radio’s “848″